This grilled corn and chorizo dip recipe is addictive. It will ruin your life! Like for real, you will go to bed thinking about it and wake up hoping no one polished it off while you were sleeping. But don’t act like that’s just me! Seriously, this recipe is that good!

There are many corn dip recipes out there, but this one is my favorite. It is packed with so much flavor. But not only is it addictively tasty, but it also looks beautiful. There are so many vibrant colors that pop out that it is the dish that really displays well.

So, if you’re looking for an amazing dish to bring with you to a summer cookout or pot luck, I promise this one won’t let you down. But, unfortunately, you will run out of this dip before the other side dishes.

It’s a straightforward recipe, everything that you need to make it is readily available at your local supermarket. Even the Queso Fresco cheese was easy to locate and super-cheap at Walmart. Chorizo might sound exotic if you’ve never bought it before, but it is easily found at many grocery stores. No specialty stores are necessary.

I will go ahead and pat myself on the back here for contributing to the recipe (Sarah usually does all of the recipe development). I suggested the chorizo.

At first, Sarah turned her nose up at it, like “don’t mess with my corn dip recipe,” but now she prefers the dip with the chorizo in it too. It is a star player in this recipe, and in my opinion, it really makes it…addictive.

Grilled Corn is Best, But…

You don’t have to grill the corn if you don’t have a grill or if you don’t want to fire it up. Grilling definitely makes the recipe a bit more involved. If you don’t already have plans to grill, this isn’t the type of dish that you fire up the grill for.

So, save this recipe for when you will grill for the best taste. That smoky flavor is definitely present in this recipe. The scorch marks also add some more color to the dish.

When it comes to grilling, we prefer charcoal, but a gas grill works too. If you want to save on time, we recommend boiling fresh corn. After a boil, you can even put them in the oven on broil to get that char flavor.

As a last resort, you can use canned corn. It will not taste smoky, but it should still be pretty darn good. So in order of our preference, it would be:

(If we crave this recipe in the winter, then we will use canned corn. But, unfortunately, we’re not too good for canned corn.)

For best texture and taste, we recommend that you cook the corn for no more than 20 minutes. You don’t want overcooked corn. We like to place the corn on the grill – still wrapped in the husk – opposite the fire. This allows the corn to steam first.

Then we unwrap the corn from the husk and place them directly on the fireside to get that char. Be careful when handling the corn at this stage, as they will be boiling. Use grilling gloves (welders gloves used only for grilling are the best) or oven mitts to handle.

Use a sharp knife to cut the corn off of the cob.

Other Recipes to Try:

Where to Find Chorizo…

So now that we’ve got the corn out of the way let’s talk about that chorizo. We found cheap chorizo at Walmart that, to our surprise, we prefer to the stuff we usually get at the specialty store.

It was only a couple of bucks which made it cheaper per pound as well. And better still, we don’t have to make a special trip to get it. You should be able to find it at your local chain grocery store.

When it comes to cooking the chorizo, you want to make sure that you cook it until it is firm and most of the excess oil is cooked off. Once the chorizo is finished cooking, make sure to pat it dry to remove any excess oil. You don’t want an oily dip.

How To Make Grilled Corn and Chorizo Dip…

Place the corn opposite the fire to allow the corn to cook without burning. After 15 minutes or so, peel the husk and place the corn directly over the fire for one to two minutes at a time or when you start to see the char marks.

Raw chorizo looks like a paste. Cook it until firm, like taco meat. It will be crumbly when cooked. Once cooked, pat dry with a paper towel to remove excess oil. We don’t want oily corn dip.

Add the chorizo, queso fresco, onion, and cilantro to a bowl.

Add the corn and mayo, mix, and let the magic happen!

From a presentation standpoint, there are several things you do with this dish. First, you can just put the dip in a bowl, open a bag of chips and let everyone go to town. There’s certainly nothing wrong with that.

It would be so good on a hotdog or sausage. Corn chips with this dip are addictive, but I imagine that it would taste great with some Lays potato chips as well. 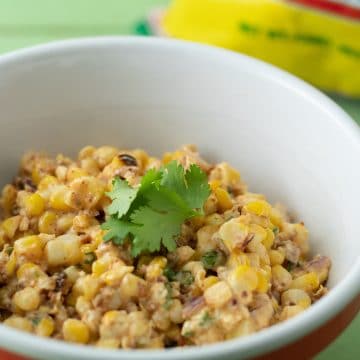 Sarah
This grilled corn and chorizo dip is a very summery, Mexican flavor inspired dish with the grilled corn and the chorizo. You also get that burst of fresh from the cilantro and a little heat from the chili powder. It is very tasty and even addictive. There probably won’t be any left overs with this one.
5 from 2 votes
Print Recipe Pin Recipe
Prep Time 5 mins
Cook Time 15 mins
Total Time 20 mins
Course Appetizer
Cuisine Mexican
Servings 5
Calories 93 kcal