Did you know that you can make a baked potato in the microwave?

Yes, you can make a baked potato in the microwave. The catch is you need potato feet. The Norpro potato feet holder is simple enough, it’s a small little tool that has 3 prongs on it that you jam into the potato. The best part is that you can play Mr. potato head with a real potato.

You put the potato feet holder on the potato, put it in the microwave for 5-10 minutes and voila! Perfect microwave baked potato, according to description. 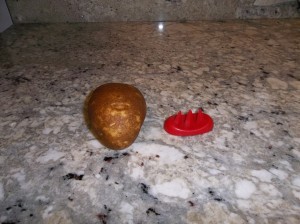 We bought the Norpro potato feet as part of our Amazon order, it was just a few bucks for 2, so why not. We were intrigued. There are times where we really want a baked potato but don’t want to wait 30 minutes for it to bake in the oven. Sometimes it’s just too hot to turn on the oven.

The potato feet arrived via snail mail, in a small package. I opened it up and found 2 potato feet holders, and no instructions. How was I supposed to bake a potato in the microwave without any instructions? Fun.

So I turned to the internet and after a quick Google search found out that I needed to cook large potatoes for 5-10 minutes. This potato looked more like a medium potato, maybe in between medium and large. Who knows? Too bad I didn’t order a potato measuring guide. Anyway, I winged it. 6 minutes it is.

I thought the potato tasted good, though a little overcooked; it tasted just like a baked potato. This is a great alternative to baking a potato in the oven. It cooks way faster (I think medium sized potatoes only need 4-5 minutes), and it’s easy to use. 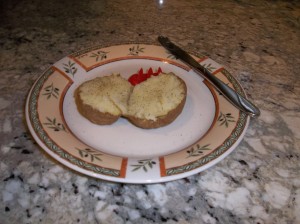 Of course I will play around with my microwave settings and see if I can figure out the timing based on potato size, but overall this was a cool tool with practical use, and it worked on the first try. My only issues were the potato falling while cooking in the microwave and not receiving the instructions.