These mint white chocolate brownie bites are a fantastic way to celebrate Christmas and the holiday season. They taste great and on top of that they look great and better still, they are fun to make. We had a blast making these sweet minty chocolate treats. Make these for your family and friends and no one will complain!

This recipe is ridiculously easy. While brownies from scratch are typically better tasting than the boxed stuff, we don’t think the difference is great enough to warrant making them from scratch for this recipe. So, just grab a box of your favorite brownies (we prefer the fudgy kind).

So, for those reasons above we decided most folks would be better off drizzling the white chocolate over the brownies (feel free to dip though). We simply put the melted white chocolate in a Ziploc bag and cut a small piece off of a corner of the bag. We then drizzled the chocolate at an angle. Feel free to get a little crazy here, you can make patterns, etc. Magic. The white chocolate looks beautiful against the dark fudgy brownies.

Other Recipes To Try:

Next, make and bake those box brownies.

Melt the white chocolate and put it in a bag.

Drizzle the white chocolate over the brownies.

Next, sprinkle the mint candies.

We hope you have as much fun making these mint white chocolate brownie bites as we did! 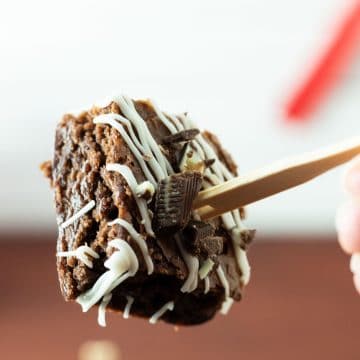