The Zojirushi ns-tsc10 vs ns-zcc10 comparison is an evaluation of two very good rice cookers. With that in mind, you can’t go wrong. In fact, there are only a few features that separate the two. However, those small details could be huge to you. 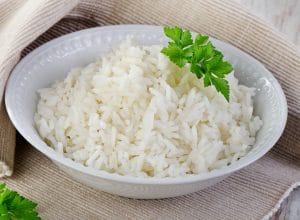 Below, I’ve detailed the similarities and the differences between the rice cookers in the Zojrushi ns-tsc10 vs ns-zcc10 faceoff.

You can use the table of contents below to skip to the comparison chart or summary.

A Tale of Two Rice Cookers

Zojirushi rice cookers are oddly shaped pod-like small appliances. For some reason, they kind of remind me of the re-entry spacecraft from Apollo 13. The dimensions are virtually the same for each machine (you can see the dimensions on the comparison chart below).

The Zojirushi ns-zcc10 comes with the following accessories: spatula, spatula holder, and two measuring cups (one for regular and one for rinse free rice); but it does not come with a steam tray. The ns-tsc10 comes with a spatula, measuring cup, and steamer tray.

The rice cookers in the Zojirushi ns-tsc10 vs ns-zcc10 comparison have several convenient features. Both have a retractable cord. It’s a really simple yet thoughtful feature that more products should have. The fold down handle makes carrying and storage easy. The ns-zcc10 has a spatula holder that helps to prevent additional mess.

Click here to get more details on the Zojirushi ns-tsc10

Click here to get more details on the Zojirushi ns-zcc10

The layout of the control panel is similar on both models. Both keep the time without the machine being plugged in. Both are easy to use. But with the Zojirushi ns-zcc10 you get a much larger control panel with big obvious buttons. The display is brighter on the ns-zcc10, you can see it here.

Both of these machines have a nonstick coating on the inner pot. Treat it like any other nonstick pot; don’t use any metal utensils with it and don’t scrub it with an abrasive. You do have to be careful when using it, but it will save you on cleanup time.

Both machines in the Zojirushi ns-tsc10 vs ns-zcc10 comparison are listed as 1 liter or 5 ½ cup capacity machines. This isn’t entirely true. In the U.S., a cup is eight ounces. When Zojirushi refers to a cup they are referring to the measuring cup that comes with the rice cooker (for best results, you should only use the measuring cup that comes with your rice cooker). It’s about six ounces. Based on what I’ve read, these machines should be suitable for a family of four. If you think you might need a larger size, both machines are available in 1.8 liter (10 cup) models.

Both machines feature the famous microcomputer Neuro Fuzzy logic technology. It means that your rice cooker will adjust cooking times and heat based on rice type and amount of water added for each individual pot of rice you make.

Only the Zojirushi ns-zsc10 comes with a steamer tray. A really cool benefit is that you can actually steam and cook rice at the same time.

However, rice does take longer to cook than most items that you would steam. It can be done though. Let’s say you want to cook chicken and rice. For example, the rice takes 60 minutes and the chicken takes 30 minutes (just an example, refer to your manual for actual cooking times). It’s best to say start the rice then about halfway through start the steaming function for the chicken. This feature makes the Zojirushi ns-tsc10 rice cooker very versatile.

I’ve come across many customers that prefer to buy products that are not made in certain countries. The Zojirushi ns-tsc10 is made in China, while the more expensive Zojirushi ns-zcc10 is manufactured in Japan. Despite the manufacturing country origin, neither machine has many complaints about quality.

You can see customer ratings and reviews for the Zojirushi ns-tsc10 here and the Zojirrushi ns-zcc10 here. I’ve come across several reviews from people who had either rice cooker for years with no problems. You might also want to check out some of the negative reviews. However, I didn’t find anything that would make me second guess the long term durability of either machine.

Other Rice Cookers to Consider

The two rice cookers above are great choices, but you might want to consider other options. Below, I’ve listed several other rice cooker models. The details that separate them might seem small but they could make a big difference for your household.

The brown stainless steel Zojirushi ns-tsc18 is basically the same machine as the ns-tsc10 but it is a a lot bigger; with a 1.8 liter capacity, it is almost double the size. For some people, the added capacity is better for their family. In fact, at least a few customers had a complaint about the capacity of the ns-tsc10; apparently it’s not large enough for a family of 4. So, if you have a large family, you might want to consider the nstsc18. This is also a China made machine.

The 5.5 cup ns-tgc10 is another great option from the Zojirushi brand. The appearance is mostly white plastic with stainless steel. Its inner pan is black to help distribute heat more evenly. This model also comes with the smart micom fuzzy logic technology. This model is also made in China.

In the Zojirushi ns-tsc10 vs ns-zcc10 comparison, there isn’t a clear winner. With either choice, you get a high quality machine that’ll work very well. However, the devil is in the details. The Zojirushi ns-zcc10 has a larger, easier to use control panel. It also has a spherical inner pot that distributes heat more evenly.

The Zojirushi ns-tsc10 has its advantages too. It has a steamer function and tray. For some conscious shoppers, the manufacturing country is important too. The Zojirush ns-tsc10 is made in China, while the ns-zcc10 is made in Japan.

If I were choosing between the two, I’d probably go with the ns-tsc10. Sure, the lcd display and spherical inner pot of the ns-zcc10 are impressive, but the tsc-10 comes with the steamer function and tray. Be sure to check out the price of both as it could influence your decision.