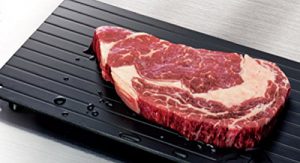 The Imperial Home MW1832 is a fast defrosting tray. It measures 14 x 8 x 1 inches and weighs around a pound. Its small size means that you won’t have to shift things around to find room for it. It can go in the same cabinet as your other pans.

Defrosting trays are a very convenient accessory to your kitchen. They can save you money and time. I’ve researched this and other fast defrosting trays. Find out more about this very low cost food defrosting solution. Read on below.

The “Magic” of Thermal Conductivity + A Little Time…

Personally, I would rather have fresh meats and vegetables that were never frozen, but that certainly isn’t practical. Sarah and I aren’t rich, or farmers. Nor do we live on a coast. So we freeze our food. When we defrost, we usually just let the item sit on a plate in the fridge. It takes forever but it is our best option. Sometimes when we’re short on time, we’ll thaw using the microwave, which speeds up the process but sometimes the food actually starts to cook.

Is the Imperial Home MW1832 Defrosting Tray really magic or a miracle…?

Okay, maybe that’s a silly question. But before I researched this product, I’d never even knew this type of thing actually existed. It never even crossed my mind. If I did know about it, I’d have bought one years ago. At first I thought it was one of those gimmicky fake products that don’t actually do anything, like weight loss pills. You know those products where people claim it works but it doesn’t, kind of like 90% of infomercial products. But I was able to confirm how and why these types of defrosters work, with science. It’s really simple.

Regardless of any hyped up sales pages you come across for these defrosters, like the miracle thaw, there are no supernatural powers at work. Just a natural phenomenon.

So how does this thing actually work? 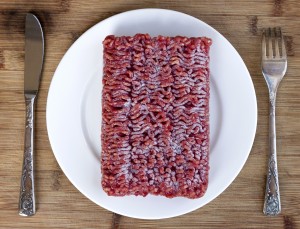 The Imperial Home MW1832 food defroster tray is not an electronic appliance, it works because of the simple heat transfer process. These trays are made out of materials that have high thermal conductivity. For example copper or aluminum (this one is made out of aluminum).

In a room, everything eventually becomes the same temperature as the surrounding air. So when you place the frozen item on one of these trays the heat from the tray is transferred rapidly, with the help of the air, to the cold item. Basically, this is the same as letting food thaw on your counter, but it happens much more quickly because of the high thermal conductive material.

The dimensions are listed as 14 x 8 x 1 inches, but after taking a look at the pictures, the thickness seems to be less than an inch. In any case it isn’t very large.

It has a sleek look. It is black and has some grooves on the surface. The edges are rounded.

The functions for this kitchen accessory are pretty simple, it does one thing; thaw food. So I knew I would be met with a lot of “salesy” hype. I wasn’t let down. In the description for the Imperial Home MW1832 there is mention of it being able to thaw rock solid frozen foods in just minutes. In just 30 to 60 minutes, you can thaw frozen chicken, lamb, beef, etc. This is the part where most would roll their eyes.

I could only believe this if it were confirmed by real world experiences. My next step was picking my jaw off of the floor. Astonishingly, its ability was confirmed by many customers. They back up the claims that this tray can defrost meats in under an hour. One customer claimed that he thawed ground beef in just 30 minutes. Thawing ground beef usually takes hours.

After researching the different companies that make thawing trays, I decided that this is the real deal. I figured reputable companies like Von Shef wouldn’t make a gimmicky product that didn’t actually work.

Imperial Home MW1832 : What Do The Customers Think…?

There are many satisfied customers for the Imperial Home MW1832 High Quality Fast Defrosting Tray. Although, I did notice that a few customers had a discrepancy with the amount of time it typically takes to defrost. One customer tested it with frozen chicken breast and found that it didn’t defrost in minutes but rather ninety minutes. That’s still a lot faster than thawing without a defrosting tray.

I think that the Imperial Home MW1832 High Quality Fast Defrosting Tray is an inexpensive thawing tray. It is a simple kitchen solution. After researching this and other defrosting trays I’ve found that they work consistently across brands. That’s because it’s a very simple type of product. It’s pretty much just an aluminum sheet. If you’d like to save some money, you can just use an aluminum cookie sheet. Otherwise, this is a good option too.

Hello! Welcome to YourBetterKitchen where we share delicious recipes, cooking and food tips to help make your kitchen experience better.